You are here: Home » Cloud Computing » What Is the OSI Model?

The OSI Model (Open Systems Interconnection Model) is a conceptual framework for describing the networking system’s functions. It was the first industry-standard paradigm for network communications, adopted in the early 1980s by all major computer and telecommunications corporations.

The present Internet is not built on the OSI paradigm, but rather on the more straightforward TCP/IP model. The OSI seven-layer model, on the other hand, is still extensively used because it aids in visualising and communicating how networks operate, as well as in isolating and troubleshooting networking problems.

The OSI Model is still very useful for debugging network problems, even if the modern Internet doesn’t fully follow it (it implements the simpler Internet protocol suite instead). This model can help decipher issues such as a single person being unable to access the internet, or a website being unavailable for thousands of people. A lot of extra labour can be avoided by narrowing the problem to one specific layer of the model. 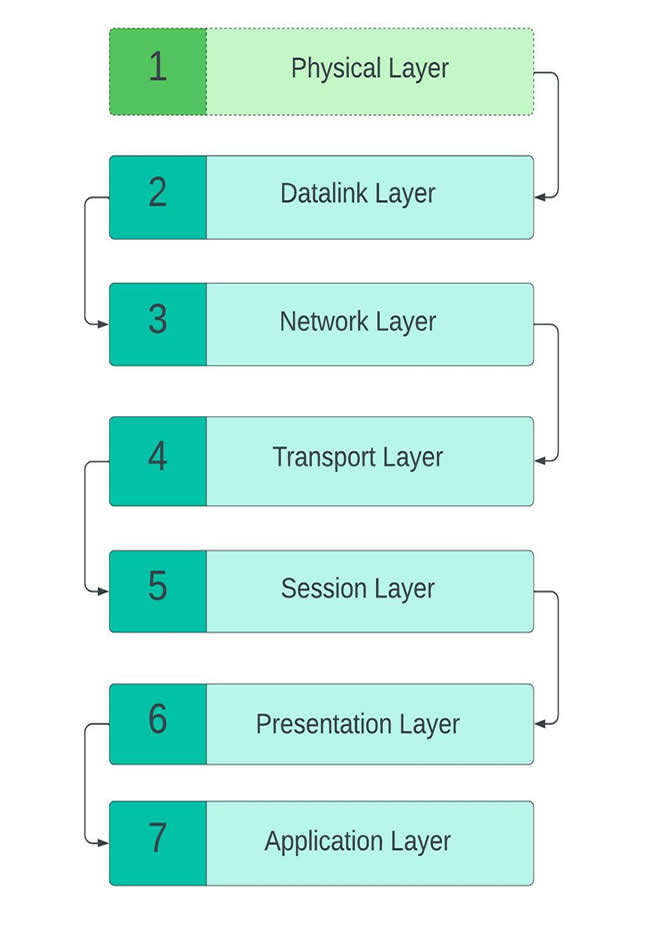 How data flows through the OSI model?

Humans move information from network to network. In actuality, it crosses seven OSI layers in both sending and receiving devices. The application layer chooses a protocol and sends it to the presentation layer. Compress it and pass it to the session layer for communication setup.

Directly linked nodes are utilised at the data link layer to execute node-to-node data transmission in which data is bundled into frames. Additionally, the data connection layer corrects any mistakes that happened at the physical layer.

The network layer is in charge of accepting frames from the data link layer and delivering them to their intended destinations depending on the frames’ addresses.

The transport layer is in charge of data packet delivery and error checking. It is responsible for controlling the size, sequencing, and ultimately the transport of data between systems and hosts. TCP, or Transmission Control Protocol, is a well-known example of the transport layer.

I basically work in the CMS, like Joomla and WordPress and in framework like Laravel and have keen interest in developing mobile apps by utilizing hybrid technology. I also have experience working in AWS technology. In terms of CMS, I give Joomla the most value because I found it so much user freindly and my clients feel so much easy to manage their project in it.

My name is Nohman Habib and I am a web developer with over 10 years of experience, programming in Joomla, Wordpress, WHMCS, vTiger and Hybrid Apps. My plan to start codingace.com is to share my experience and expertise with others. Here my basic area of focus is to post tutorials primarily on Joomla development, HTML5, CSS3 and PHP.